First of all, Happy New Year!  I hope that 2010 brings innovation, prosperity and success to us all (and the HTC Dragon/Passion to Verizon). 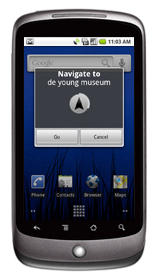 The real reason for this post is that I wanted to call your attention to an incredibly compelling essay by Jaron Lanier.  Apparently, the piece is based on an excerpt from his new book:  “You Are Not a Gadget: A Manifesto.”

Mr. Lanier asserts, quite convincingly, that we’ve taken the wrong direction with the internet (perhaps by extension, apps, open source, etc.?).  I whole heartedly agree with his contention that, rather than sinking to the lowest common denominator of crowd sourcing, we should be encouraging, and significantly rewarding, innovation and creativity.

Personally, other than the random Tweet, I’ve significantly scaled back my participation in the ceaseless chatter because, as Mr. Lanier points out:

“…we made a huge mistake in making those contributions unpaid, and often anonymous, because those bad decisions robbed people of dignity…”

Later in the essay, he drives the dagger home:

“We shouldn’t want the whole world to take on the quality of having been designed by a committee. When you have everyone collaborate on everything, you generate a dull, average outcome in all things. You don’t get innovation.”

I strongly recommend that you read this thought provoking essay.

I don’t have a ready solution, but I’m certainly working hard in 2010 to refocus on doing work that creates new things, applications and technologies, instead of incessantly adding my two bits to the valueless e-noise.