The Tablet? Not for Me!

So many bytes have been consumed speculating about the Apple Tablet that I’ve pretty much given up reading the stories / posts.  I simply don’t care.

A good portion of my foundational thinking about mobile computing comes from meetings that we had with Jeff Hawkins, back in the Palm Computing 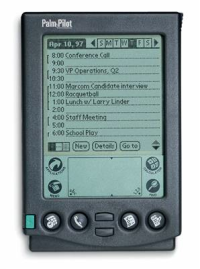 era.  Mr. Hawkins’ stories about carving a block of wood until it fit in his shirt pocket have stuck with me.  As the story goes, that block became the model for the early Palm Pilots.

That’s exactly the point.  Until we have some kind of implants that connect us directly to the data flow, I want the following things in my device (in order of priority, but these have pretty much all been show stoppers):

My dream has always been to have one handheld device for most activities, along with, maybe, a netbook/ultra portable laptop that I could drag along if I planned to do heavy text entry (I’m fine with Graffiti, and I’ve come to quite like the soft keyboard on my iPod Touch).

Finally, getting around to my point, I’ll gladly spend whatever I have to in order to get a device that meets my criteria and runs on a reliable network.  I’m certainly not, however, going to spend several hundred dollars for something that’s inconvenient to carry, no matter 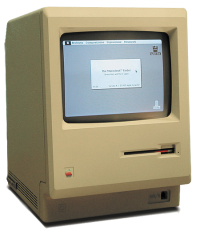 how beautiful it is.  Beauty and functionality are useless to me if the device is sitting on my desk when I’m out and need to connect.  At that point, a tablet is about as useful as my first Mac 128K (long since recycled) would be.

As far as I’m concerned, the iPhone 3GS and the Google Nexus One are as close to my ideal device as we have right now.  Perhaps I’m just dense, but I don’t understand why the tablet is the subject of such breathless anticipation.  I’d much rather have Apple devote its considerable engineering talent to making the iPhone even better.  They’re almost there…

1 Response to The Tablet? Not for Me!